“First Ever Garden” Lessons Part the One

Restraint. More is not always better. Less is often more.

It would have been easy in the delusional world of the first garden to try and make this bad boy 30’x 30’. Had we gone with those first instincts it would have been an exercise in futility. That’s too much work. We wouldn’t do it. We’d get discouraged, tired and cranky at not living up to each other’s expectations. 12’x 10’ is big enough to be proud of and small enough not to be too disappointed if things don’t work out exactly as we had hoped.

We are eager to “brew” good soil. There is so much advice to be had. I believe we have talked each other out of adding 20 bags of top soil along with the peat, lime, and horseshit we’ve already added. There really are no shortcuts. Give it a little help and then dig in the dirt. A lot.

While driving home from work last week I found myself complaining in my head. “I have to work in the garden when I get home. I’m so tired. I don’t want to.” After a short nap I took my little rakey thing, sat my ass next to the garden and got to "work". After about 10 minutes I realized this wasn’t really work- it was just playing in the dirt. I’ve seen kids enjoy the hell out of that and it worked for me. Add to the mix that I was pretending to be a pirate digging for buried treasure (rocks) and it was really much easier and kind of fun. 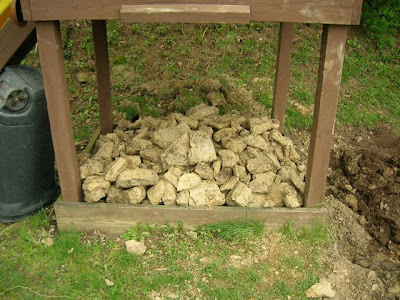 There's GOLD in that there dirt!
One reason we decided on a garden is because we love each other and we love our dog who loves to be outside. I’m not very good at being outside. Maybe I have some long buried traumatic experience but ask me to go sit out on the porch and I am as twitchy as a sleeping puppy.

Yesterday while digging for buried treasure, the sun was shining on my face and the dog was checking in with a zillion kisses every 10 minutes. HELLO! That was awesome. I stopped digging for a while and rolled with the dog in the grass. What A Blast. Somewhere as we grow up we no longer think to just say “hey honey, I’m going to go outside and roll with the dog in the grass in the sunshine.” Gardening makes this possible in the misguided adult world without feeling like “this is really weird- I’m going back inside.”

There are other lessons (hope, persistence, patience and negotiation) that have come to mind but I’ll save those for another post. In the meantime, here are some bibb lettuce seedlings going on and a “Jiffy Garden” seed starter waiting to happen. 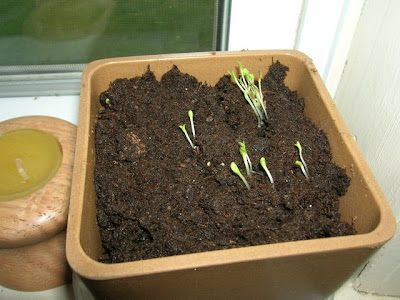 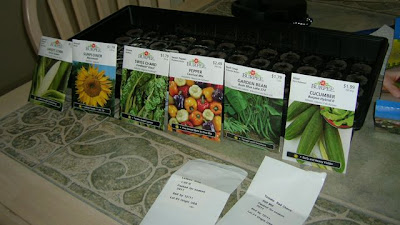 I really am jealous of your garden!

Oh good for you! Just remember your sun hat and keep having fun! (You can also dig for diamonds, you know.)

I love, love, love to garden! I am perfectly happy just pulling weeds and deadheading flowers and sweeping the patio. And if a dog or three comes to join me (and they always do), well, that's just icing on the cake!

i love my gardens. I feel so purposeful when i work outside.

That was exactly what I loved about gardening (pre-bad back). It put me outside to listen to the birds and watch the butterflies without getting bored.

sometimes, when the weather is nice, I come home from work and sit in the sun with my eyes closed and it is lovely. Outside is something we forget about in our busy world, I think... 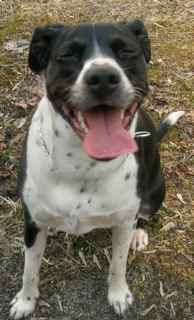 I love warshboards, but it's so hard to keep them in tune!!!!
Cindy Knitwonpurltoo
I won't even knit this person a rope to climb out of a burning building.
jellidonut
I've spent many an hour creating a whole lot of ugly.
heideho
Winner Winner Chicken Dinner!
jellidonut
"I work back and forth for a couple rows, then join the circle. It leaves a two row seam to sew and makes it SO much easier to be sure that no twists sneak in. "Roxie
Oh yea, I do that to- except when I forget- doh. Sophanne
"I'm happier than a colony of 'skeeters in a mud bog!"Lydee
But I just want to stay home and kniiiiiiiiiiiitttttttttttt!
Levi, age 6 3/4
Somehow I horsed up the first pattern row .... my new favorite phrase for the inevitable mistakes from knotmuchofaknitter
I hate when the comfort knitting goes awry.  It's a little like being mad at your spouse - cut off from your Happy Place just when you could really use a bit of happy. Impulsive Arts
I'm pretty sure you can't call yourself a "novice" anymore, though. Yarnhog

WooHoo Sophanne
I've got lots of hair and lots of curls. There are some humid days I swear it needs it's own Social Security number.
Gotta Knit
That's knitter's logic for you. I will knit what I want, no matter the likelihood of failure (dammit).
Grumperina
..at least he has his own built-in Hippity Hop Yarny Old Kim
Screw the moratorium Grumperina
Knit to Blog-Blog to Knit Yarnhog

I knit what I want! Knitting Sutra

If you do three stitches and you have to go to the bathroom, hold it. You'll never know where you left off. If you have to pee, hold it. Take the dog out first. It's not playtime. Debbie, from the Knit Shoppe.


Why are you so fat, please? unamed 5 yo

Knit what you want. Even if it's crocheted.

When it says "left front", it means "left front when you have it on," NOT "left front as you're looking at it." Yet another hard-earned lesson, and I'm happy to share it. Yarnhog
...after all, laundry will never really be done... but, if I keep at it, my sweater will... TammyKnits